Excellent response to a poor quality report published which attempts to deny the damage caused by child abuse.
Read my own blog entry here https://tellaboutabuse.wordpress.com/2013/04/04/childhood-abuse-and-dissociative-disorders/

In the December 2012 issue of the Journal, Joel Paris, MD, wrote an article about the current status of dissociative identity disorder (DID) and the dissociative disorder field in general. He suggests that DID is merely a ‘‘fad’’ and that there is no credible evidence to connect traumatic experiences with the development of DID. We refute several of the claims made by Dr Paris.

Our biggest concern as non-North American researchers is that Dr Paris does not reference a single international study related to dissociative disorders and DID, despite the considerable and increasing empirical literature from around the world. His speculation that DID is not diagnosed outside clinics that specialize in treating dissociation is not consistent…

The damage caused by child abuse

Mental health problems are often caused by childhood abuse, so raising awareness of mental health problems can help people recover and heal from such abuse. It has also been shown that survivors of abuse do sometimes become abusers, and that recovering from the own abuse is key to preventing this.

Why do people try to denying the damage?

This blog post raises awareness of Dr Joel Paris‘s attempt to dismiss Dissociative Disorders, which would both deny people treatment and reduce awareness of the abuse which cause the disorders.

His article suggested that one particular disorder – Dissociative Identity Disorder was a ‘fad’, despite it’s inclusion in the DSM psychiatric manual for several decades.

A letter in response to  his article, written by specialists is Dissociative Disorders can be found http://eassurvey.wordpress.com/2013/04/04/growing-not-dwindling-worldwide-phenomenon-of-dissociative-disorders-disinformation-about-dissociation-dr-joel-pariss-notions-about-dissociative-identity-disorder/

What is the reality here?

I did some research and here are some simple figures from Google Scholar which show the number of articles (excluding patents) covering the two main dissociative disorders. Sadly Google Scholar only gives approximate numbers rather than exact ones, it says ‘About 193’ for instance. It all got rather complicated so here is the graph of the results looking at articles for each 5 year period since 1998. 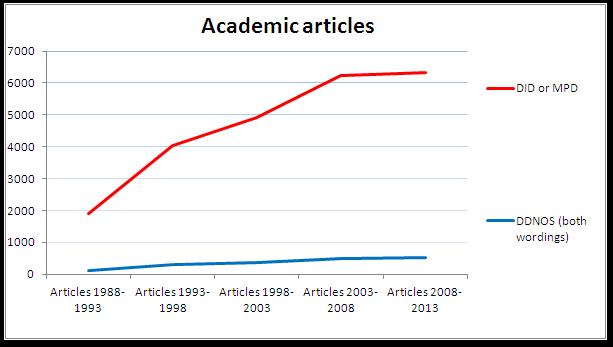 Basically, these results back of the findings of the letter I’m blogging about.
In the last 5 years 2,270 out of 3130 academic articles on “dissociative identity disorder” have also included abuse, over 70%, again refuting Dr Paris’s assumptions.
So I looked at the last 5 years of academic papers written by Joel Paris, 240 appeared, none of those on the first page had a heading with Dissociative or Dissociation in it. Search for “Joel Paris” Dissociative for the last five years gave only two results with Dissociative in the title – the letter I’m blogging about, and the original article.
Not exactly his key interest then.

I thought this might be a bit of an unfair search since it used to be known as “Multiple Personality Disorder” and is still called them in the main international psychiatric manual, and was called that in the older versions of the DSM manual, so I searched for that term instead, and found about 4740 results between 1990 and 2000, and about 5840 results from 2000 to 2010 – so still an increase despite the term being rarely used now.

The next disorder in severity is known as “Dissociative Disorder Not Otherwise Specified” or DDNOS for short, so I searched for both terms separately (google scholar seems unable to search for either term). The results said shows 289 articles from 1990 to 2000, increasing to 510 articles between 2000 and 2010.
The DDNOS results from about 193 to 396 results over the same periods.

In the end I just went back and searched in 5 year periods, from 2013 backwards.

No matter how many ways I looked at the data the rise in diagnosis was clear, as was the number of articles now focused on treatment rather than questioning the evidence and cause of dissociative disorders.

Please share this to raise awareness of those working against child abuse awareness.